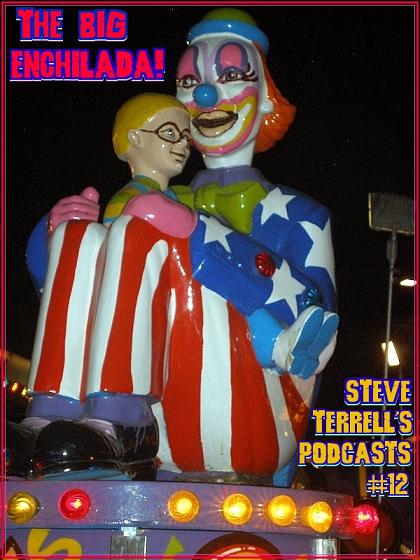 The Big Enchilada is back with The Monkey-Wrestling Polka!

This episode is divided into four segments. There's a set of songs from bands I've discovered through The GaragePunk Hideout. There's a barrel of monkey songs, inspired by a recent You've Got Good Taste podcast. There's a bone-crunching, loser-leave-town cage match of wrestling tunes and finally, a crazy polka party. Truly this is a milestone in Freeform Weirdo Podcasting!

(Background: Monkey Island by The Derangers)
Rockabilly Monkey Face Girl by Ross Johnson
The Monkey Song (You Made a Monkey Out of Me) by The Big Bopper
You're Bound to Look Like a Monkey by Hank Penny
Monkey's Uncle by The A-Bones
Koko Joe by Don & Dewy

(Background: Hulkster's In the House by Hulk Hogan & The Wrestling Boot Band)

The Happy Wanderer by Brave Combo
Beer, Broads and Brats by The Polkaholics
Who Stole the Kiska by Frankie Yankovic
Weiner Dog Polka by Polkacide
(Background: Ranch Hand by Desert Suns)

Posted by Steve Terrell at 10:06 AM No comments: