BIG ENCHILADA 51: Kicks from the Sticks 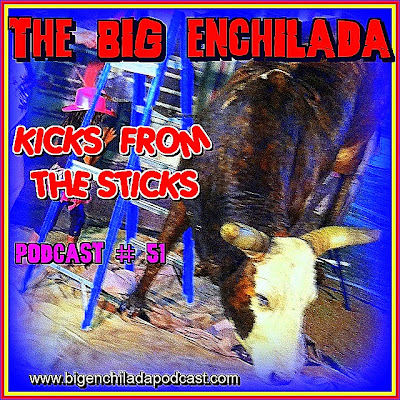 Welcome to the new hillbilly episode of The Big Enchilada podcast. To paraphrase Johnny Hicks in the opening song here, we're going to get some kicks from the hicks way back in the sticks. Besides the twisted honky-tonk and hopped-up hillbilly sounds you've come to expect from these shows, Kicks from the Sticks also includes a set of old-time string band, jug band and country blues songs inspired by the latest South Memphis String Band album ...Old Times There.

(Background Music: Cowbell Polka by Spade Cooley)
Get Your Kicks from the Country Hicks by Johnny Hicks
Baby, Baby, Don't Tell Me That by James "Slim" Hand
Jack's Red Cheetah by Cathy Faber's Swingin' Country Band
Show Me the Way by The Great Recession Orchestra
Honky Tonk Rhythm by Bobby Sisco
Raise the Moon by The Goddamn Gallows

(Background Music: Banjoreno by Dixieland Jug Blowers)
I Said My Nightshirt and Put On My Prayers by June Carter with Homer & Jethro
Hot Water by Big Sandy & The Flyrite Trio
Restless by Eilen Jewell
Goddamn Blue Yodel #7 by Slim Cessna's Auto Club
Then I'll Be Movin' On by Mother Earth (featuring Powell St. John)
Up Against the Wall, Redneck Mother by Eugene Chadbourne

BIG ENCHILADA 51: Kicks from the Sticks by Steve Terrell on Mixcloud