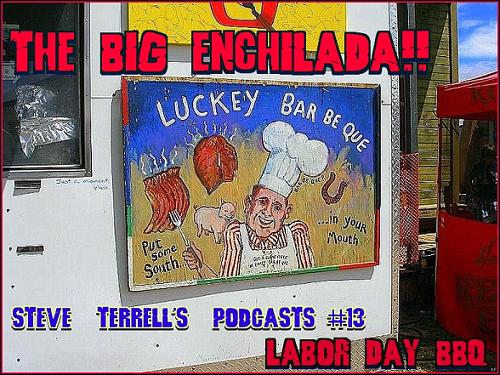 It's Labor Day season, time to honor the working men and women in this great land. And in particular, let's honor one particular type of worker: the barbecue cook.

This podcast features songs of labor, songs of BBQ, plus a few side dishes in between. Artists here include The Waco Brothers, Jimmy Reed, the late great James Luther Dickinson, The Del-Lords The A-Bones, Los Peyotes, The Fuzztones, Mojo Nixon and many more. So come on down to the BBQ.

(Background Music: Solidarity Forever by Joe Glaser)
Plenty Tuff and Union Made by The Waco Brothers
Big Boss Man by Jimmy Reed
Dark as a Dungeon by The Maddox Brothers & Rose
Workin' Man by Hank Williams III
Working Man by Bo Diddley
Red Neck, Blue Collar by James Luther Dickinson
How Can a Poor Man Stand Such Times and Live? by The Del-Lords

(Background Music: Work Song by Five to One Odds)
Mojo Workout by King Salami & The Cumberland 3
Fuego by Los Peyotes
Geraldine by The A-Bones
Baby Doll by The Del Moroccos
Headlock on My Johnson by The Fuzztones

(Background Music: Struttin' With Some Barbecue by Louis Armstrong & The Hot 5)
B.B.Q. U.S.A. by Mojo Nixon & Skid Roper
Good BBQ by The Riptones
Texas Overture by Pere Ubu
Goin' on Down to the BBQ by Drywall
(Background Music: Cook Yer Enchiladas by Stephen W. Terrell)

Posted by Steve Terrell at 1:42 AM

Boy oh boy did this make mowin' the yard an absolute HOOT today! 1st I felt the pride of being the blood that oils the machinery of capitalism; then I rocked out a bit; and then I suddenly became as hungry as a Coal Miner - so much so that I grilled a whole bunch o' chicken out on the back deck while enjoying my earlier handywork in the yard. So many great tunes on this here eppy-sode! Great big tip o' the 10 gallon hat to that boy singing about the joys of Texas style BBQ. That Hank III tune was equally sharp - as I (believe it, or not) ain't to familiar with Hiram's grandson.

And... thanks fer the kind words, too, Steve-O.